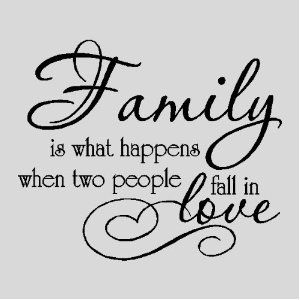 Bringing a child into my life didn’t just impact me – it impacted my whole family. I have a pretty close knit family – I lived with my parents when I started dating my other half and have a close relationship with my two young cousins (then 2 and 4) and auntie and uncle who live close by. When I was in the “analysing” phase of deciding whether or not to get serious, I thought about the potential impact on me and my life but to be honest I didn’t really think it would affect anyone else..

At first I was right, I brought my OH to his first “Sunday Dinner” after a few months of dating – my cousins adored him immediately (embarrassing amounts at times!) and he seemed to fit right in. It didn’t really come up very much that he had a child – my family would ask how the little monster was doing and we’d have general conversations but we never went into too much detail. My OHs divorce was still being processed and all the related nastiness and restrictions were hardly pleasant dinner table discussions.

As our time with the little monster increased so did the conversations, the girls (my cousins) picked up on this more and began to ask questions, as children do. Between us and their parents, we explained that my OH didn’t love the monsters mummy anymore and that’s why they don’t live together anymore etc.

One night as I was putting the girls to bed on a babysitting night, they broached the relationship between me and the little monster – simple right?! I explained that if/when my OH and I get married I will be his Step-Mum… Queue meltdown.

The girls both burst into tears almost instantly – I was totally confused and had no idea why they were so upset! While trying to simultaneously hug and calm both of them out came “We don’t want you to be an evil stepmother – we love you how you are!”. Well oh my shit! The Disney stereotype really does hold some power.. obviously not what I actually said but I did spend a long time explaining that even if I was a step-mum I would not suddenly become ‘evil’ and I would carry on being the same person I always have been.  It took a few weeks for them to believe me and probably took up a fair chunk of my auntie and uncles time too but eventually they seemed reassured that I wouldn’t one day grow a wart on my nose and start implementing evil plans against all surrounding children.

Welcome to the family Monster!

My memory is a little hazy for a period here – at some point when the monster was 18-24 months we introduced him to my family. It was a little awkward at first – my OH and I were torn between being ‘one of the kids’ with the girls and being a person of authority with the monster but on the whole it was great to see the 3 kids in my life playing and interacting together. It was also strangely lovely to see my parents interacting with the little monster and his reactions to them gave me a bit of a soppy warm feeling inside – this really was probably when I started to realise the impact the little monster was having on me and how much my feelings for him were growing.

After a few months I started to think about monsters position in my family, not just with me and the OH but my wider family circle and I realised I had never given any consideration to the fact that my Mum and Dad were now “potential-future-step-grandparents”. Again the talking circle was ignited and we settled on ‘Nana X’ and ‘Gramps Y’ for my  parents – the little monster took to it IMMEDIATELY and delighted in shouting their new names at them when we went for dinner.

I have to put in writing, throughout this period and every day since I am completely blown away by how amazing my family have been accepting and embracing both the little monster and my OH into their lives. When we were first dating, my MIL once asked me what my mum thought of my new relationship and told me she would be “devastated” if her daughter was dating a divorcee with a child – I’m sure, behind closed doors, there were probably some disappointed conversations about my choice but I never once felt unsupported or judged in any way and I am so thankful for that. My mum in particular has been a massive support to me throughout my new found “mummydom” and I don’t know what I would have done without her!

My stance now, (after many occasions of being very timid and shy about my role and my place in monsters life) is to just get on with it and everyone else can think whatever they want to.

My only goal or aim is to make the little monster feel happy, loved and safe no matter where he is or who he is with. Underpinning this, my first priority is Monster and his Daddy, then our family unit with myself and then the wider family – his side and mine. If that means sometimes making grown-ups unhappy, we just have to deal with that along the way.

3 thoughts on “Whose family are we?”

This is my one-sided view of our journey to becoming  a family. An honest opinion on the trials, tribulations and hopefully some of the joy.

Thank you for visiting